A few weekends ago, I spent Saturday afternoon with my mother-in-law, while Hubby was out with father-in-law at a sporting event.  MIL brought along some crocheting and we spent the day on the couch watching my favorite movie ever (Zombieland), her crocheting and me knitting.  I mostly taught myself to knit from a book I picked up at Joann’s a few years ago. 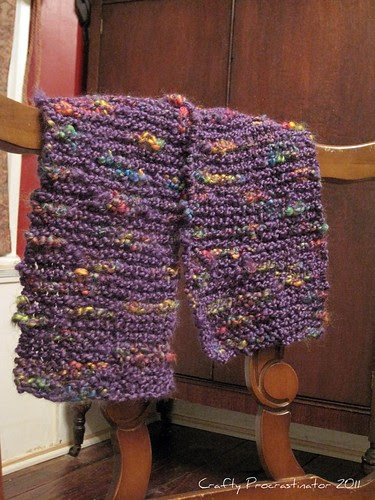 Scarf made from some random purple yarn I thought would look really cool knitting with huge needles…I was right :) 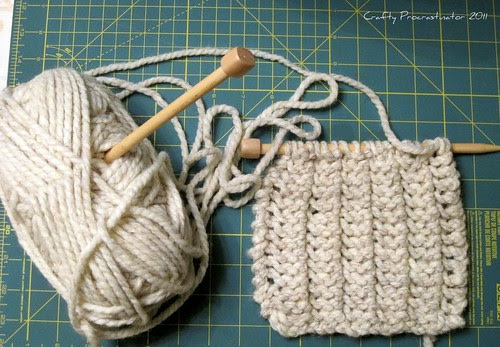 My first scarf is done…and I’ve started on a second.  I even found a pattern online that involves slightly more than just the single knit stitch….it looks awesome!  I unfortunately caught the flu last week so knitting kept me busy while I was recovering on the couch. 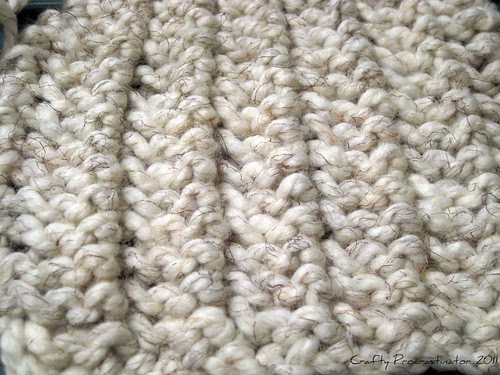 Week 4 of 2011 and I’m only getting around to my first Sunday Stash post.  I’m expecting my stash reports to be pretty boring with the fabric diet, but we’ll see.

Recent additions to the stash are 8 yards of Tula Pink Parisville. 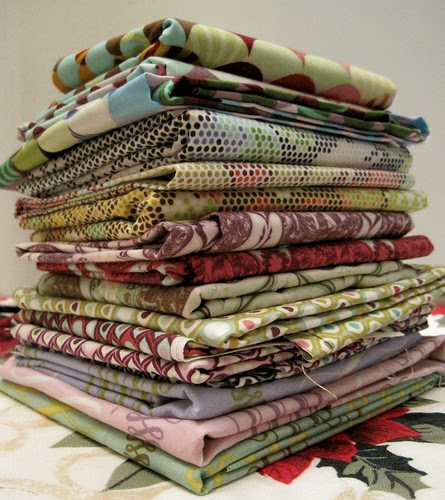 And a fat eighth bundle (5 yards) of Central Park by Kate Spain (which I’ve already cut up). 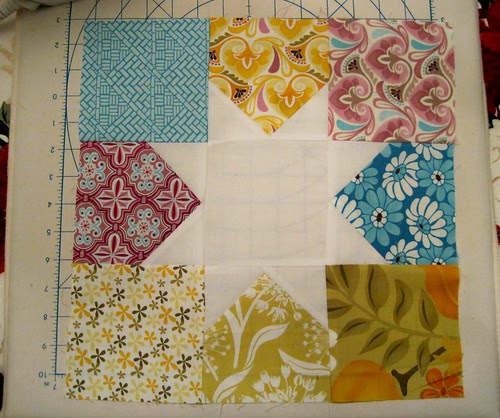 Fabric out this week: 1 yard Robert Kauffman Kona cotton in white and 2.5 yards of Central Park by Kate Spain for a quilt top using a Moda Bake Shop tutorial ~ more on that later.  One block down (above) – 15 to go.

You can check out how everyone else is doing here.

I was so excited to sign up for the swap that I rushed through the entry form and don’t really remember what info I left for you.  Hopefully, this will make it easier for you!

I love cheery colors…pink is by far my favorite color.  You know, that bright pink?  I heart it!  I love traditional designs in modern fabrics…and hand quilting…LOVE it!

I really only have 2 dislikes…batiks and wonky design.  I was not a fan of the wonky log cabin quilt along on flickr.  I tried so hard to participate but I couldn’t bring myself to make those cuts!

Hopefully my mosaic helps your creative process and really, no matter what you make for me I’m sure I’ll love it.  Just have fun! 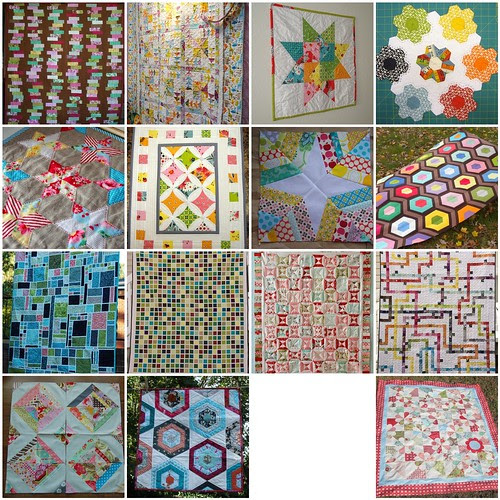 I really need a blog makeover but I haven’t figured out how to do it yet.  I used to be pretty tech savvy in college (oh the things I used to do)…but I haven’t had the time to devote to teaching myself anything new lately.  If you have any tips, let me know.  For now, I’ll keep using the blogger templates.

My first bee ever started this month -  Scrap-bee Blocks {on flickr of course}.  It’s a stash busting bee – because each month we make a block using our own fabric and send it to the Queen/King  Bee.  It’s Dustin’s month and he requested donkey blocks.  At first, I was a little scared of the tiny 1” finished blocks, but once I started putting it together it wasn’t soo bad.  I consolidated some of the blocks so there would be less piecing.  I’m really happy with how it came out.  I wish I would have made it a little more fun, like some of the others in the group but oh well.  It’s done now!

I’m so excited!  I got into Doll Quilt Swap 10!!!  SO EXCITED!  Participants were drawn by lottery so I was waiting and crossing my fingers, followed by more waiting, and received an email this weekend telling me I was in.  I can’t wait to get started!

This year I vowed to stay home to ring in the new year….but instead I hung out with family, drank some wine, ate lots of pizza, and only had to walk 2 blocks home.  It was a perfect night!

While I’m sad to see 2010 go; I’m welcoming 2011 with open arms.  I can’t wait to see what’s on the road ahead.  Like everyone else, I’m making some resolutions…the biggest of which is a {fabric} diet.  So for at least the first six months in 2011, I’m working from stash {insert GASP here}.  I don’t think it will be difficult unless something absolutely amazing is released but even then, I’ll be ok.  There are exceptions to this diet…like backing, binding, and batting.  Of course, I’ll work from stash where possible but I don’t have a whole lot (or any) 5 yard pieces of fabric laying around for a quilt back.  Two other tiny exceptions…things already on their way to me….some must have Central Park by Kate Spain and Parisville by Tula Pink ~ both ordered before Jan 1st so I’m good!

My other goal for 2011 is to give back  a little more.  I only made one charity quilt during 2010…I want to at least double my goal and make 2 (and hopefully more) for this year’s Stitch N Pitch with the Phillies.

And because I didn’t want to leave you all with a photo-less post, here are some  of the things I made during 2010. 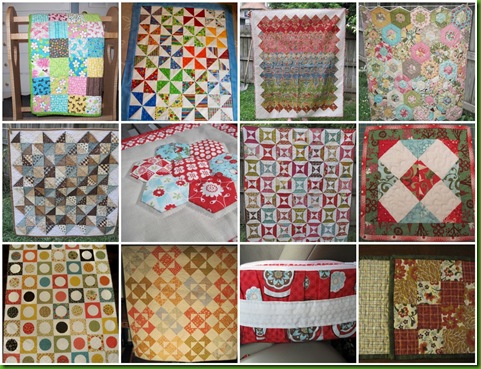