There are a few giveaways out there in bloggy world right now.  Here are a few I found through the ORB flickr group.

Michelle’s Musings is giving away a $50 shopping spree to CSN Stores in honor of her 28th birthday.   I went practical and picked a backpack for school!  Giveaway open until Feb 23rd!

Greta at Because I Sew So is giving away a FQ of Flea Market Fancy!!!  No seriously she is!  Giveaway open until Saturday morning Feb 21st.  Hurry over and leave a comment.

Dena is giving away 1/2 yard prints of Heather Ross, Tea Garden, Moda Mother Goose, and Make It You by RJR Fabrics for her 300 blog post milestone.  Go over and congratulate her!  Tell her I sent you!  Giveaway open until Feb 23rd.

Grendelskin is giving away a fabric strip set based on your choice of two color-ways to make your own quilt top using the Film in the Fridge tutorial for string quilts.  Giveaway open until Feb 28th.

I gave it my best effort…2 hours worth of sewing, ripping out large amounts of stippling, playing with tensions, rinse and repeat.  I told myself to not be a perfectionist about stippling and I was pretty happy with my work until I peaked at the reverse side.  My tension was way out of whack!

First, it was too tight on the back.  I used 2 different colors of thread which I shortly decided was a bad idea.  After adjusting the tension to what I thought worked well, at least on my scrap piece, I ended up with the thread being really loose on the back.  Grrr!  Needless to say after I tore it all out a total of three times, I ended up straight line quilting the table runner.

Any advice regarding tensions would be really helpful!  I think I’ll whip up some pot holders for practice. 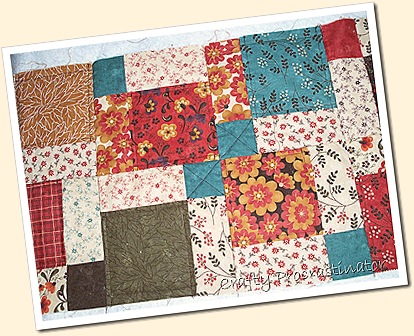 In other non-quilty news, there is a lot of snow on the ground from the snow storms last week and the week before.  The supermarket was out of eggs this weekend due to the storms and there were signs posted in the produce section indicating prices would be increasing and that supplies would be low.  I’m a little nervous about it to say the least.

A picture of our snow covered street the day after the last storm: 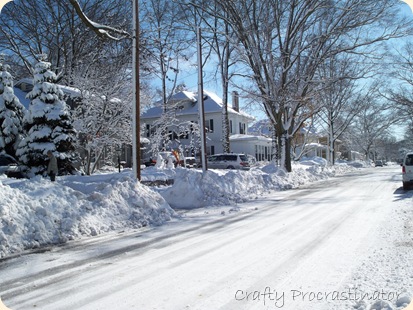 ~no snow!  I’m still looking at piles of the white stuff but at least it didn’t inconvenience my weekend.

~me and Hubby went to a Flyers game Friday night complete with Chickie and Pete’s crab fries and my new favorite beer Blue Moon!

~I spent an entire Saturday sewing.  I finished one project and am almost finished my happy campers quilt.  Pictures to come soon!

~I bought my first OttLite lamp at JoAnn’s Saturday (40% off!) while picking up some Navy Kona solid.  The light is awesome!

~my wonderful husband is making a surf and turf dinner for Valentine’s day.  He cooks amazing meals!

Posted by Tricia at 4:41 PM No comments:

Recently Julie started the Philly Chapter of the Modern Quilt Guild.  I was sooo excited when I saw Julie post about it because I’ve been looking for a quilting guild to get involved with locally.  I’m semi-new to quilting…I love the bright and bold fabrics that aren’t sold at JoAnn’s (read: designer).  Like all quilters and seamstresses, I have a mild complete obsession with fabric.   I make what I like and generally work with colors I love.   Am I a modern quilter?  I don’t know.  I’m not exactly sure what modern quilting is or if it can be completely defined.  Over at the Modern Quilt Guild blog, the question, “What does modern quilting mean to me?” was asked and I’ve been trying to answer it.  Here’s what I came up with:

The Essence of Life

For Christmas, my extended family participated in a white elephant gift exchange.  My intention was to make my gift…it was a good intention.  I pieced a disappearing 9 patch table runner out of Essence by Deb Strain for Moda.  I was going to make coasters or buy a candle to go with it.  I only got as far as the piecing until work magically sent me off to central Pennsylvania for a few days.

What really happened was I became  afraid…of stippling.  Silly, right?  I loved the pieced top and thought it would look amazing stippled…but I couldn’t bring myself to do it.  So there it sits, unfinished and calling out.  But now I have a problem…I have a baby quilt I want  to stipple so it looks like I’ll be tackling that table runner after all!  It’ll be great practice for a bigger project. 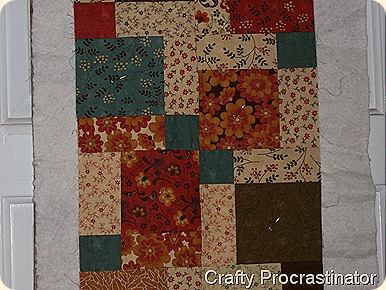 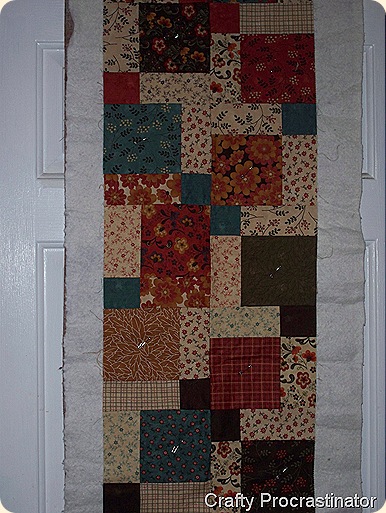 We have another major snowstorm on the way tonight.  Our third of over 20 inches in one year.  Craziness!  Maybe I’ll attempt some stippling between shoveling duty!