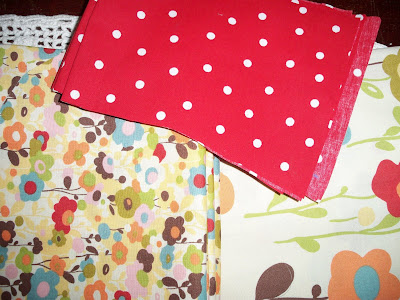 Some wonderful MODA fabrics for my Amy Butler Frenchy purse. I love this line of MODA and if the economy were a little better, I'd buy much more of it. The red & white polka dot is not MODA. Just something I picked up from JoAnn's.

Everything is cut, even the interfacing...so tonight the sewing begins. Wish me luck!
Posted by Tricia at 5:00 AM No comments:

I love summer...the hot sun, blooming flowers, flip flops, the beach, riding around with the top down on the jeep, and baseball. This weekend kicks off the unofficial start of summer and I CAN'T WAIT. Good-bye high heating bills, hello sweltering heat! 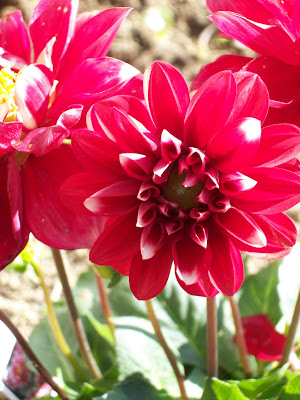 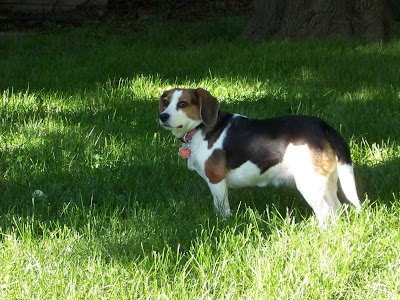 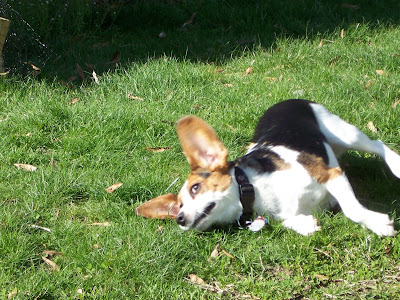 Phil's/Met's game in a suite! Sweet! 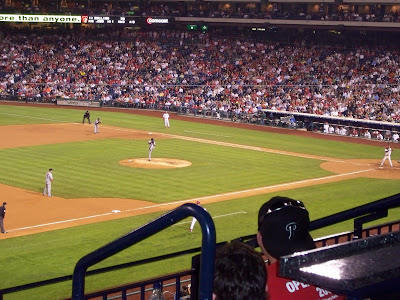 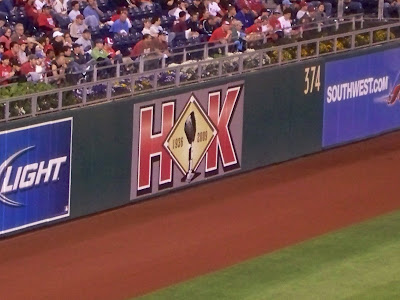 Posted by Tricia at 2:00 PM No comments:

Here it is, finally!

This was my first time quilting so I stitched in the ditch along each row of blocks. It was fairly easy with no major hiccups, but I'm glad I did not ambitiously try stippling!

Binding was interesting though. I followed my Singer Complete Quilting Bible (or something like that) and was not happy with the end result. I machine stitched the binding to the back of the quilt on 2 sides. I decided to hand sew the binding on the other 2 sides and it came out much better. I hated the book's instructions on how to bind the corners; so I'll definitely be looking for a new and better looking method for my next quilt. 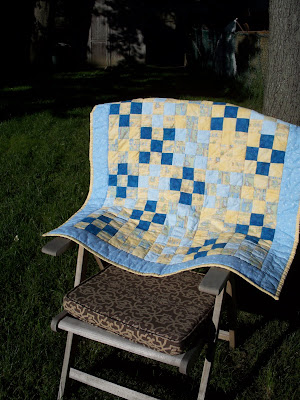 Close up of the quilt: Note, the colors did not bleed, it's the shadow of the late day sun. 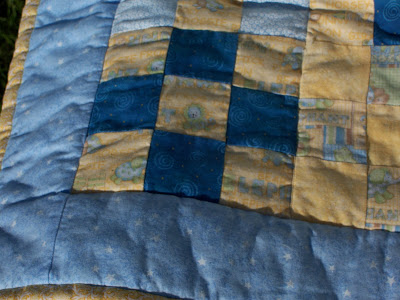 A view of the back of the quilt...I LOVE this fabric. I think it's perfect for this quilt. 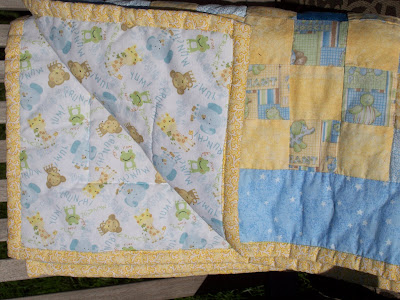 It's washed and ready to go to baby John's house this weekend...I don't know how I'll part with my first (completed) creation! 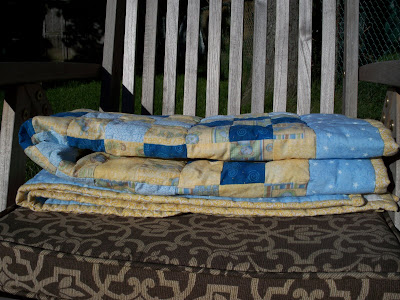 Next up: An Old Red Barn Co. Quilt-A-Long (see my side bar for the link). I'm off to pick out my fabrics today after work :)
Posted by Tricia at 6:00 AM No comments:

Murphy’s law…the story of my life.

Normally when traveling I keep a close eye on my belongings. In this day and age, you have to. To me, nothing is safe in the hotel room. I've read too many online reviews lately and even know people who have had items stolen from their hotel rooms. Everything should be locked away to not even tempt the housekeeping staff. Luckily, my hotel provides a safe. However, as you might’ve guessed, my safe does not work. So I basically left a laptop, wallet, mp3 player, camera, and GPS (it is the technology age after all) in an unlocked safe.

I ran up to my room, mid day and found my door open. Yep, awesome! Housekeeping had come, clean, and left my damn door open. So now not only is my stuff sitting in an open safe, but my door is open. Coincidence? I don’t know.

I went straight to the front desk, after checking that my possessions were in place. I got an apology. That’s it! Not a “we’ll look into it”, not even a “we’ll talk to the housekeeping staff”, just an apology by some creep with a British accent, so I'll admit the apology did sound nicer. I also told them my safe was broke. They said they would send someone up right away. Since I was attending a conference I said I would not be able to be in my room and they assured me it was not a problem. I go to my room half an hour later and my phone is blinking red. The safe fixer people left a voice mail (which retrieving was a PITA) that as I was not in the room, they would have to come back when I wanted them to open my safe. They even got the freakin message wrong! I put the little privacy, do not disturb, aka GO AWAY sign on my door and left it up for the remainder of my trip!

This stuff seriously only happens to me! Email me if you'd like the name of that lovely little hotel!
Posted by Tricia at 2:00 PM No comments:

I believe in destiny…

I’m attending a work conference in Baltimore. I was asked to go suddenly to fill in for another coworker. I was only supposed to be here for 2 days, but as it turns out I’m here for the long haul.

At first it seemed like God, or somebody was keeping me from traveling. I had so many “stay home” signs, it’s a little eerie. First, none of my clothes fit. Literally. I know you have fat clothes. Every woman has fat clothes. Nevermind. As I’m writing this I’m remember my husband is one of my only readers and this is TMI for us newlyweds!

So aside from buying a whole new wardrobe (which is ok, it’s one of my 101 goals), my headlight burned out the night before I was set to leave. Yep! So I drove my butt to the local auto part store, picked up the light, and off I went to replace it. After an hour of arguing with Hubby, the light was in place, but it still didn’t work. Apparently the part store (jerk) sold me the wrong light. So we spent an hour pulling out the headlight (trust me it was fun) to replace something that already worked! So I said f-it I’ll drive during the day.

Day of departure: So frustrated with car last night, don’t pack until morning of trip. Late for work. Leave work around noon, forget insurance cards. Driving out of state with one headlight and no insurance cards = (potentially) lots of tickets. Forget business cards. You do know you are going to a business conference right??? Get lunch, get business cards, get on the road. Forget toothpaste. Awesome!

Stay tuned for more tales of my adventures in Baltimore!
Posted by Tricia at 12:35 PM No comments: