My lame excuses to avoid dieting and the gym

Last year I went on a diet about this same time to lose about ten pounds. I did weight watchers for a few months and I really stuck to it. I think it's the mentality that I'm paying for it, I should get my money's worth. My downfall was my vacation last August when I overdosed on cookies :) Since then there's been no easy way to get back on track. Needless to say I gained the 10 pounds back and haven't had any motivation to do weight watchers again.

For a year I had a gym membership which I never used, so I cancelled it. There was just not enough time to go to the gym, or maybe it was my lack of motivation! So this year, I bought a GPS and planned on using it to go hiking. I figured it'd pay for itself since I wouldn't need the gym with all the hiking I'd be doing...yeah, right!

My new lose weight quick scheme is to get Wii Fit (for Nintendo wii) only I can't find it ANYWHERE. I have my fair share of video games and when I'm in the store the boy behind the counter asks if I'd like to reserve a game. HA! Reserve a video game! Shouldn't you be able to just walk in the store and buy it?! Well Wii Fit came out a week or so ago and no one has it. Not Amazon, Best Buy, Walmart, Circuit City, Gamestop, Sears, NO ONE! The fact that I can't find it makes me want it more. If it's sold out everywhere, in this "recession" it must be AWESOME! My search continues....I have a few leads so hopefully I'll have it by Friday. Oh, and I know using a video game to lose a few pounds sounds ridiculous but if I'll be playing video games anyway, what's the harm?

UPDATE: Well I became impatient after multiple trips to Best Buy and being told a million different estimates of when the game would be in stock, so I took the craigslist approach. I got my Wii Fit yesterday for slightly more than what I would have paid in the store but the kid did deliver it to me. I tried it out after work today and will post my review of it soon :)
Posted by Tricia at 6:03 PM No comments:

Planned on taking FH out to dinner Friday night but wasn’t sure where. Wanted to try a new place, since we are both creatures of habit but logically it didn’t make sense to spend alot of money on a dinner we may not like when we could go somewhere and know we’ll love it. FH drove to Haddonfield and I led him right to Fuji’s (the best Japanese/Sushi place EVER). I think he was pretty surprised considering Fuji’s is a little expensive and we’re both trying to save for updating the house and for the wedding. If you are ever near Haddonfield, NJ, I highly recommend Fuji's; not only for their sushi but also their cooked Japanese cuisine is pretty yummy. Haddonfield is also a cute little town to walk around after dinner too. They have a lot of little shops and the homes are beautiful.

The back story to my favorite food: My parents and brother were in a football pool with my mom's boss K. The bet was if my family lost they would have to go eat sushi which at the time was GROSS to us and if we won K would come to our house and cook us breakfast. We lost the first year so K made them go eat all kinds of sushi. (I was exempt because I wasn't part of the pool.) My mom loved the sushi but not so much for my dad and brother. We would go to dinner there so my mom could satisfy her craving for sushi and eventually we all started ordering the sushi. I'd have to say for most people it is an aquired taste. I introduced FH to my food obsession and he ended up liking it right away. That's how I knew we were meant to be (jk). My fav are the unagi rolls (eel) which are actually cooked but whatever! 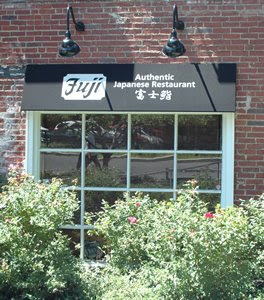 FH's dinner minus a few pieces he already ate.
Posted by Tricia at 2:58 PM No comments: 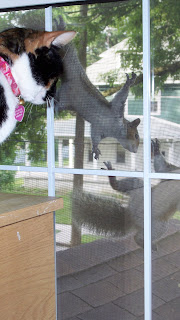 Sunday morning I'm laying in bed when I hear some scurrying on the floor. I figured the cats were playing but after awhile I realized that both cats were staring at the window with the blinds closed. I opened the blinds to find a squirrel hanging on the screen less than 6 inches from my face. Thank god the window was closed!! I hate squirrels; they are the same as rats in my book.
The squirrels took turns jumping on and off of the screen which amused the two cats, the dog, and myself for close to 20 minutes. I thought it was picture worthy.
Posted by Tricia at 8:24 AM 2 comments:

Wow, my first blog entry in my very first blog! :::Cherishing this moment:::

Really I'm just delaying the inevitable, like always. I obsess over school and exams for a ridiculous amount of time. I have an exam on Thursday in a class that I will never use in my professional career. Did I mention I'm in grad school? I've completed 4 / 16 classes for my degree so I've got a long way to go.

For an entire week before an exam I drive everyone around me crazy. I obsess over studying, which might be ok if I actually studied. I make a plan to study over the weekend before an exam and then every day after work up until the exam. IT NEVER HAPPENS! I find every possible way to avoid studying. This weekend it was farmer's market with mom, visit from FH's parents, cleaning, cleaning, and more cleaning. Basically, I'd rather clean than study!

So it's Tuesday, and I haven't gotten very far going through my notes. I guess my final procrastination is my new found interest in ..... blogging :)
Posted by Tricia at 8:19 PM 1 comment: