Those that live in glass houses shouldn't ...

Every Tuesday I leave work a little early to try and beat traffic on my way to night class. I usually get to campus an hour or more before class because traffic is just that bad around the city. I kill time sitting in my car watching the people walking / driving by. Today was no different only I left a little later than usual and had to parallel park on a busy city street with minimal space. I used the pull right in tactic but I was 2 feet away from the curb. Grrrr!!! I tried to straighten out but backing up and moving forward several times did not change the situation. I had to pull back out (in rush hour traffic here) and re-park. It was ridiculous to watch, I'm sure!

Once my car was parked correctly, the people watching commenced. I saw a guy throw back a bag of doritos...not something I personally do in public, a lady walking a really different colored Siberian husky, and some people driving like absolute morons.

The parking authority drove by my car and slowed down, which freaked me out. At that point it was 5pm and time for me to pay the meter anyway. I had my quarters all ready to go but the meter was out of order! It was overloaded with quarters probably due to the recent price increase. I took a picture of the meter # and out of order sign just in case. I'm worried I'll get back to my car tonight and have a ticket! After seeing Parking Wars on A&E this weekend I'd rather not have any run ins with the PPA!
Posted by Tricia at 5:39 PM No comments:

Hubby and I celebrated our 1st married Valentine's day together! We exchanged cards and a bag of green m&m's for him and a tiger stuffie for me. Normally we put alot of money into Valentine's Day but with our recent purchases and the economy it's money better left unspent.

Our recent purchase for Hubby's birthday: 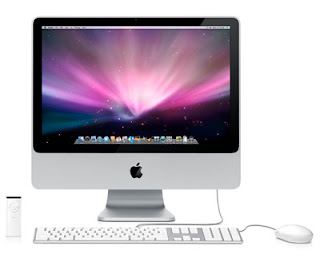 It's awesome! I couldn't see wasting money on another Dell laptop with Windows Vista...so I'm not a PC. I'm a MAC baby!! The iMAC is currently sitting on my desk, with it's fancy printer, while my laptop and printer(s) are homeless. I bought Hubby the wireless keyboard and mouse too. We've been uploading CDs onto it all weekend since Hubby lost all his music when his Gateway crashed after which his iPOD died.

Saturday morning, Hubby helped a friend move and I spent the morning with my mom. We went to the gym and had a good work out, went to the supermarket, and even fit in a quick trip to the fabric store. Hubby and I had dinner with my parents, my brother, brother's gf, and brother's gf's son instead of fighting the crowds of couples trying to have a romantic dinner on an overrated non-holiday. Mom made meatloaf topped with mozzarella cheese, twice baked potatoes, spinach, and green beans. I made an Angel food cake for dessert which we topped with strawberries and whipped cream. 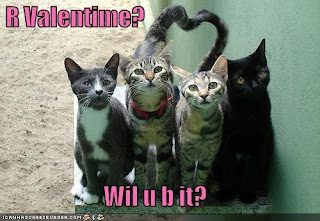 Hubby's birthday was February 5th! He turned 29 this year :) In honor of his birthday and because he loves cheesecake I made him a peach cheesecake. The recipe is super easy! My mom used to make this for us, so I did a quick search of the internet and here's what I came up with:

1. In blender sprinkle unflavored gelatin over water, let stand 2 minutes.
2. In small saucepan, bring juice to a boil. Add juice to blender and process at low until gelatin is completely dissolved, about 2 minutes.
3. Add remaining ingredients and process at high until blended.
4. Pour into 9 inch pie pan (graham cracker crust).
5. Chill until firm, about 3 hours. Garnish with peaches.

Pic of my work area, complete with new blender! 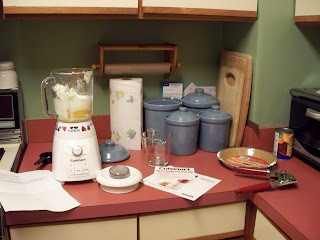 The cheesecake was easy to make, really good and definitely something I'll be making again!
All ready to eat! 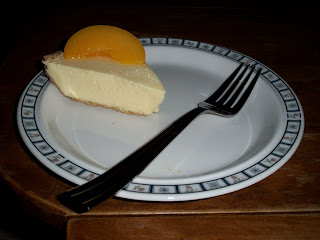 Posted by Tricia at 9:58 AM No comments:

I fell off the church wagon. How hard is it to give up an hour of my Sunday for God you ask? When that hour is in the morning at 8 am, it's pretty darn hard right now, especially since it's winter. I've been meaning to go back but church then leads to me going food shopping (Acme is right up the street) and I hate food shopping, especially when it's all little old ladies (coming from church of course). I want to be in, then out, without knocking little old ladies to the ground. It scares me because I look at them and think, wow, that will be me someday. Makes me want to cry quite honestly.
I've also fallen off the gym wagon. I was motivated to go, along with everyone else right after New Year's. None of the machines I like to use were available so it was pointless going. I need to go back especially with the 7 boxes of girl scout cookies Hubby bought, the baking I've been doing, the huge bag of Swedish Fish (mmmmm!) from Christmas, and all the take out we've been having.
It's been an especially cold winter here. Last night it snowed more than has in the past 2 or so years. The snow covered trees are beautiful. I love snow, except when I have to drive in it. Beetles are not made for driving in snow and unfortunately I had an exam last night. The teacher bumped the exam up to earlier in the evening because of the weather but was 40 minutes late!! By the time I left after the exam the roads were messy and snow covered. Weather forecasters predicted 1-3" of snow and damn were they wrong. Philadelphia received 8" of snow last night! 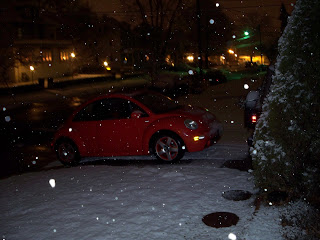 I couldn't get my car up any further in the driveway after class because it was mostly covered in snow. 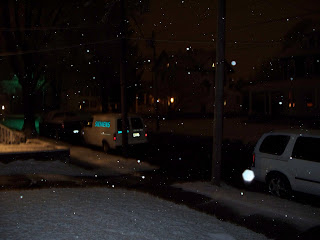 The beginning of the storm!

Our neighbors are ridiculously (insert negative adjective here). We try to stay out of their way, avoid eye contact, etc but sometimes its hard to ignore them. For the past 48-72 hours we've been experiencing a round the clock rock concert. Brother #2 who occupies the upstairs apartment has all of his windows open (yes, it is very, very cold here) and is blasting music starting around 730-8am until 10pm. It's annoying because there is no escaping it in our house. I don't know how the people (his brother & family) deal with it!!! I've going to get a copy of the local noise ordinance tomorrow.

Paige is going to the vet tomorrow. It's time for annual check up, shots, etc. I'm glad she's going because her eyes have been runny lately. I'm not a bad fur mommy though! Her eyes have always been runny, just really bad lately. She's also quite stinky! We're going to have the vet check out her situation but it's pretty bad. I'm afraid she's making our whole house smell like butt! 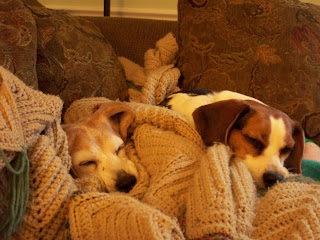 Hubby's bday is tomorrow so it's time to get cracking on his birthday cheesecake.